Cartwright Conversions will exhibit two of its vehicles at this year’s CV Show, including a restyled Ford-approved seven-seat welfare vehicle that will be shown for the first time.

Built on a Ford Transit the welfare conversion has been modified with a Webasto diesel-powered hydronic heating system that provides hot and cold running water quickly and cheaply.

The redesigned messing area includes a microwave, hot water boiler for drinks and cleaning facilities all housed in a new floor to ceiling cabinet.

Cartwright has Ford Qualified Vehicle Modifier (QVM) status for its welfare conversion on the Transit which recognises a converter’s high manufacturing standards and consistent quality.

Only a handful of converters hold this position for a welfare vehicle.

Although a new design it retains the patented rear facing toilet which is accessed separately to the storage area in the back of the vehicle through its own independent door.

The Ford Transit welfare conversion will be built to National Small Series Type Approved standards at Cartwright Conversion’s new premises. The recently acquired 26-acre site in North Lincolnshire, is being redeveloped for the rapidly growing converter.

Cartwright will also showcase its popular eight-seat welfare conversion on a MAN TGE – making them one of the first converters in the Country to offer a MAN welfare van.

Managing Director, Steve Shaw, said: “We are very excited to be launching two new vehicles at the CV Show this year. This is an opportunity for us to showcase our innovative designs on two incredibly versatile and robust LCVs.

“It comes at an exciting time for us as we prepare to move into bigger premises to house our fast-growing range of vehicle conversions.”

Visitors can see the Ford Transit welfare van on the Webasto stand in hall 5 (5C10) and the MAN TGE on the Eberspacher stand in the same hall (5D70). 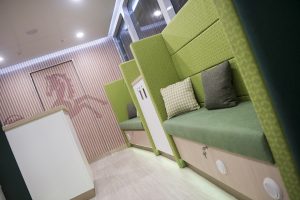 One of the UK’s leading trailer, commercial vehicle body and conversion manufacturers, Cartwright Group, has announced the acquisition of a 26 acre site in North Lincolnshire to create a new flagship base for Cartwright Conversions Ltd.

Established in 1952 and now under the banner of Better, Built in Britain, Cartwright Group employs a workforce of over 1,000 highly skilled and trained staff who design, engineer and build the widest range of high quality trailers and rigid bodied vehicles on the market. Their customers include some of the UK’s biggest companies, such as Royal Mail, Argos, Asda, Sainsbury’s and Tesco and in flying the flag for British manufacturing excellence, the business also has major export customers in Europe, Australia, UAE and South America.

As part of its continued UK expansion programme, Cartwright Group intends to relocate Cartwright Conversions to the new site at Belton, and expects to increase the number of jobs from 72 to around 250 over the next 18 months.

Cartwright Conversions was launched in 2016, and, going from strength to strength under Commercial and Operations Director Steve Shaw and his team, the business produces a wide range of specialized vehicles including ambulances, mobility, welfare, police and security vehicles for a range of clients, including the NHS, UK police forces and highways maintenance companies.

A planning application for the demolition, redevelopment, and extension of the site has been submitted and, subject to planning, Cartwright Group will commence work on site later this year with the aim of Cartwright Conversions being fully operational in the new facility in spring 2019.

Eden Planning Director Donna Barber, advising Cartwright Group on the planning and development of the site explains “the Belton location is perfect, with good access to the motorway, it enables Cartwright Conversions to stay in the area, easily relocate its skilled employees and provide room for future growth. Being outside but close to the nearest settlements means there are no amenity issues but that local people can access the site by walking, cycling or bus. The site itself is particularly suited to meet their needs, combining industrial buildings with hard standing areas. The proposals would bring a disused industrial site back into productive use, add a further 150,000 sq. feet of production space creating new jobs. Alongside this, additional local jobs and investment will also be created during the construction phase. We look forward to continue to work with the council to ensure that the local community benefits from the new jobs created”.

Cartwright Conversions Commercial and Operations Director Steve Shaw explains: “As well as holding a careers fair in conjunction with the council, Cartwright will also be introducing their multi-award winning apprenticeship scheme, aimed at young people looking to work in manufacturing.”

“Attracting new investment and jobs to North Lincolnshire is a key priority for the council. We actively work with businesses to encourage new start-ups, expansions and relocations. I have met with the company and their plans are impressive.

“This is a major development that will transform a disused industrial site and bring it back to life – creating hundreds of jobs and training opportunities.

“While the plans are subject to approval, I welcome Cartwrights expansion proposals to transform the former Belton Brickworks into their new flagship base.”

The planning authority will determine the application later this year.

The Cartwright Group is helping Vision Express to take their business on the road with a revolutionary new trailer that has been designed and built to be a mobile eye testing facility.

The trailer was officially handed over to Vision Express on Monday (12 March), at the start of a national week of activities to raise awareness of the eye condition, glaucoma.

In a first for Cartwright, the trailer was built at the Group’s manufacturing facility in   Cheshire, and then handed over to their conversions’ division in Yorkshire.

Drawing on the expertise of the two sides of the business has proved a success.

The single axis semi-trailer was built by the Cartwright Group using composite panels pressed at their own facility in Altrincham. The 11 metre trailer is fitted with storage underneath and four hydraulic rams to level it out when it is unhooked from its tractor unit.

Inside the space has been transformed by Cartwright Conversions into a mobile eye testing facility designed to reflect the high street optician’s layout and design. Divided into five areas with a reception and examination rooms, it has running water and heating.

Engineers have created a false ceiling to hide the complex electrical work that links to an  on-board generator to power the lighting, a temperature control unit and a satellite for Internet access.

Steps lead up to the trailer with a platform lift and separate entrance for wheelchair users.

Cartwright Conversions specialises in converted vehicles for the commercial market and is widely known for its welfare van and range of ambulances. As the trend towards remote working increases, its progressive designs are finding new uses with household names.

Steve Shaw, Commercial and Operations Director at Cartwright Conversions said: “We are incredibly proud of the Vision Express mobile eye testing facility which is the result of a combined effort from two parts of Cartwright’s business. Working together we have been able to build a high quality, cost effective trailer conversion that will be used by hundreds of people nationwide.”

Fitted with the latest eye testing technology, the trailer will be touring the Country during Glaucoma Week (11-17 March) offering free eye testing to the public. Details of the cities it will visit are available here: www.visionexpress.com/world-glaucoma-week-2018  .

Vision Express has joined forces with the Road Haulage Association to raise awareness of the potential dangers of leaving glaucoma undetected particularly among HGV drivers.

RHA chief executive Richard Burnett said: “The Road Haulage Association is delighted to be associated with the Vision Express initiative and is proud to be operating the Vision Van on its behalf. Good eyesight is vital for any road user but for an HGV driver, their livelihood depends on it. Despite this, there are still far too many drivers who ignore any weakness in their vision, weakness that may well be because of glaucoma.

“Although easy to diagnose, many drivers are nervous of making the initial approach to an optician. The Vision Van will play a vital role in conveying the message that good eye health will actually prolong a driver’s working life.”